Posted on November 22, 2019 by Dr. Susan Jamieson in Health Improvement

Chronic conditions seem to be rooted, at least in part, in inflammation. That’s according to a recent article in Harvard Magazine, which explains how this discovery began because of an investigation into why exercise helps so many health issues. 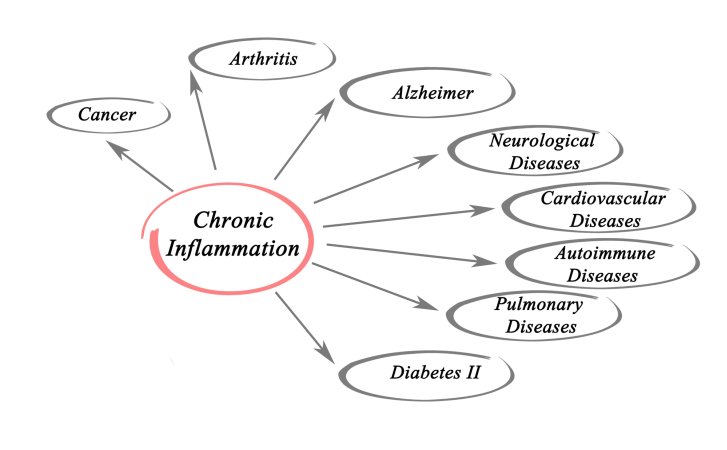 “Exercise reduces the risk of cardiovascular disease as much as cholesterol-lowering statin drugs do.”

They investigated the biomarkers in the blood of 27,055 women participating in a long-term study, as well as other factors.

“We were actually surprised that reduced inflammation was the biggest explainer, the biggest contributor to the benefit of activity, because we hadn’t hypothesized that.
– Samia Mora, Associate Professor of Medicine

The researchers thought that they’d find that reduced blood pressure or losing weight explained the health benefits of exercise, but what the data showed what that it was reduced inflammation that made the biggest difference when it came to the benefits of increased activity. In short, the anti-inflammatory effect of exercise gave huge health benefits, although odds are good nobody ever explained the benefits of increasing your activity levels to you in this way.

This led to further research into whether inflammation was a significant factor in chronic conditions related to cardiovascular disease such as dementia and diabetes, including a 2017 clinical trial called CANTOS (Canakinumab Anti-Inflammatory Thrombosis Outcomes Study),

In this trial with over 10,000 patients, an anti-inflammatory drug was administered by itself, without simultaneously adding statin drugs to reduce cholesterol. The researchers dug deeply into the data, looking to see whether the anti-inflammatory drug, canakinumab, might affect illnesses seemingly unrelated to cardiovascular disease: arthritis, gout, and cancer.

In all of these cases there were significant reductions in these chronic conditions, some of them quite shocking. For example, lung cancer mortality dropped by as much as 77 percent.

What Can I Do To Reduce Long-Term Inflammation?

It would be great if we could just pop a pill to reduce inflammation, but it is a normal part of our immune system’s protection system when we have a health issue. The key is to reduce long-term low-grade inflammation that is triggered by your lifestyle. You can reduce the lifestyle causes of inflammation (and chronic conditions) with a few simple lifestyle choices.

The cumulative effect of these lifestyle changes will be to reduce inflammation significantly, which certainly should improve your chances to avoid cardiovascular disease, diabetes, dementia, depression and other sadly common health issues and chronic conditions.

For more Health & Wellbeing news as well as information about events
at Dr. Susan Jamieson Integrative Medical Practice, please visit us on Facebook for regular health updates or
register for our newsletter.