Posted on January 7, 2022 by Therapists in Health Improvement

As a doctor in Hong Kong for so many years, I see patients who have had many consultations with public and private doctors regarding abdominal pains, perhaps had operations even, but have not been properly diagnosed or helped.

Last week I saw a young man who has suffered for three months with stomach pains and loss of appetite. He had been to another four doctors and had an endoscopy & colonoscopy having been admitted to a public hospital. The family were getting more and more worried and the boy frustrated at missing school.  On hospital testing nothing showed up to help in diagnosis: there was no cancer , or bacterial H. pylori, but just some inflammation found in his stomach.

In his case, after specialized testing in my clinic I found the mercury level to be eight times over the normal limit. Easy to fix –and after appropriate medications to remove this from his body, he was 100% normal.

In the past 10 years we have seen over 1000 cases of similar heavy-metal issues, not just mercury but the others that can affect us .

Previously discussing abdominal discomfort, abdominal bloating or pain, we’ve talked about SIBO (small intestinal bacterial overgrowth) and acid reflux. Whilst these are common and I treat them regularly (especially SIBO), a more unusual source of this problem is heavy metal toxicity, mercury, lead and arsenic at the top of the list. 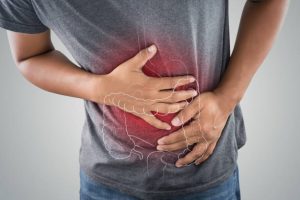 WHY WE GET HEAVY METAL POISONING

It’s difficult to know how we pick up some of these heavy metals (lead, mercury and arsenic, being common problems in Hong Kong). It’s  useless focusing on dental fillings, eating fish etc, most people either inherit it at birth, or to put it simply, people with poor detox enzymes are prone to accumulating this from the environmental pollution.

The fact is, everyone is exposed to toxic metals. We breathe them in,  we eat or we drink them, but our body’s detox systems normally excrete them easily.

There are various ways of testing heavy metals, in urine, blood or even hair. How we test ,depends on what we’re actually looking for in the patient and their specific symptoms.

A DNA enzyme test is quick to assess our detox capabilities but generally the people who have bad hangovers, will be the people who don’t have the enzymes to get rid of these harmful chemical compounds. The liver simply doesn’t have detox enzyme reserve. Simple natural supplementation will address this…

For more Health & Wellbeing news as well as information about events at Dr. Susan Jamieson Integrative Medical Practice, please visit us on Facebook for regular health updates or register for our newsletter.