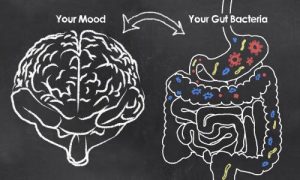 You may think your brain and your gut are as far apart in terms of function as two body parts can possibly be. But research suggests there are direct connections between your gut flora and the health of your brain.

This notion goes back to the nineteenth century. Back then, scientists believed that issues in the gut could lead to depression and other mental disorders. Now more than a century later, researchers have come to believe their early compatriots were right: a healthy gut leads to a healthy mind and vice versa.

Scientists have discovered an increasing body of evidence that shows gut flora – those bacteria living in your digestive tract – can produce chemicals which have a direct impact on the brain. These affect mood and anxiety levels, and may even cause or at least influence depression or other mental disorders. Research with mice at Ireland’s University College Cork have found dramatic changes in behavior when gut flora is altered, or removed entirely. The university’s John Cryan has found that mice which have had their gut flora wiped out can no longer recognize other mice.

We’ve always known that we have a symbiotic relationship with our gut flora. They help digest our food, we provide a comfortable living environment. But this research suggests the connection between us and these organisms is far more complex than previously thought.

Cryan’s research with mice has revealed behavior that is analogous with depression and anxiety in humans, and even autism. Of course, it isn’t easy to extrapolate directly from mice to people. But Cryan believes his findings open the door for further research into how gut health influences the human central nervous system.

The connection between our guts and brains goes in both directions. Research shows that the brain may influence gastrointestinal functions and immune responses.

This suggests mental illness may lead directly to physical illness and digestive problems. That may seem obvious (if you’re upset, your stomach and digestion can get upset). But the research suggests this connection operates at a far deeper level, making us more susceptible to a range of illnesses when we suffer mental issues. The phrase “It’s all in your mind” appears fundamentally wrong. A mental or emotional issue may directly or indirectly open us up to infection, or worse.

The research in no way suggests good mental health will prevent cancer or other serious illness. But it does suggest that a healthy mind has considerable influence on gut health and the general health of the body.

While this research is in its early stages, there are things you can do right now that take advantage of the potential for managing your mental health through your gut. But maintaining a healthy digestive tract goes beyond mental health. Unhealthy gut flora may lead to weight gain and low energy. That’s why we launched the Hong Kong Gut Health Centre… it’s becoming clear that good health, whether mental or physical, requires a healthy gut.

You can find out more about managing the health of your own gut flora here. Those microscopic bugs you depend on will thank you for it.