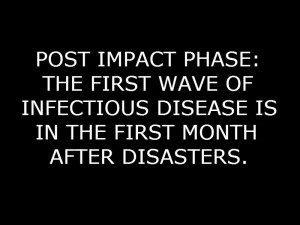 “Well, we could get you on a military flight there,” Celeste said. “Getting you back is the problem, as the locals are queuing for days. Even my relatives are trying to get out, as they’re sick of the smell of dead bodies.”

Crazy? I’m in a devastated city of a quarter million people, staying in a home with no electricity or running water, canned food only, and all the criminals are running free because the prisons have also been torn to shreds by typhoon Haiyan. I’m frankly scared. I may be resourceful, but my only training is medical.

I’m wondering what on Earth made me decide to take this trip on. No one forced me. I saw an opportunity and took it. I knew I could do it.

My trip to  Tacloban on Sunday November 19  had been prompted by meeting my downstairs Filipina neighbour Celeste for the first time on Tuesday night. Over a commiserating glass of wine, she told me that her father’s job before the disaster in her homeland had been chief of traffic and also disaster risk management.

According to her Dad – Buddy Estudillo – there was no medical aid at that time.

This scenario reminded me of my Sri Lankan experience, when locals invited me to vaccinate against water-borne disease in the first week after the Tsunami. http://lightdoctor.net/charity/tacloban-typhoon-relief.  I explained that in these situations more people could die of infectious disease such as hepatitis. That because of lack of clean drinking water and also no hand washing after going to the toilet, these diseases could be the last straw for a stressed undernourished body. Also, in that week I didn’t see another aid worker. Their vehicles and aid had been impounded by the Sri Lankan government or stolen, and so they were paralyzed. Somehow it had been simpler for someone like me, with the support of locals in the ground, to do some good work.

Hearing first hand of the trials and tribulations of these people with nothing left meant more than watching news footage. There and then I decided to go to give aid personally. My advantage is that I’m not a large aid agency with layers of bureaucracy and protocols. I decide a plan, then make it happen (and I pray a lot!).

Celeste, her Dad and I made a plan over the next two days. It wasn’t easy due to communication problems and intermittent mobile reception, but we soon had a plan. Buddy said people had received tetanus vaccine, however water was a problem and they were worried about people contracting a fatal disease called leptospirosis, contracted from rats, which were already beginning to overrun the place.

Having experience of this, I know that to medicate and vaccinate thousands there are two main problems – vaccines can’t be out of the fridge for long, and because there are many boxes it’s too much to carry.

Nick Thompson, friend and local pilot, walked into my Hong Kong medical office. “My plane’s co-owner and I have come up with an idea of us flying the plane from Penang, to Tacloban. We can take aid. Or, if you can get in yourself, with our small plane we can pick you up. We are applying for flight plan permission.”

Now things were falling into place. I knew, that one way or the other I was going.

Located in the heart of Hong Kong’s Central district at the corner of Queen's Road Central and Pottinger St, with the building entrance on Pottinger St. Only a few minutes walk from Exit D of the MTR.

Parking is available for an hourly charge close to Jubilee Street at The Centre.

For more Health & Wellbeing news as well as information about events at Dr. Susan Jamieson Integrative Medical Practice, please visit our Facebook for daily health updates or register for our E-newsletter.